THE International Monetary Fund sharply lowered its global economic outlook today and warned that an intensified euro crisis could tip the world back into recession. Its latest forecast is for the world to grow 3.3% this year and the advanced countries 1.2%, sharply lower than it saw just four months ago. Those numbers, it warns, are predicated on a comprehensive solution to Europe’s crisis.

More interesting, and disturbing, are some findings in the IMF’s accompanying Fiscal Monitor. Last year was one for fiscal hawks to celebrate as fiscal consolidation proceeded apace. Throughout the advanced economies, budget deficits fell by about 1% of GDP. Only a little of that was due to the cyclical economic improvement. Most was structural, i.e. through discretionary spending cuts or tax increases. That should continue this year, led by America where, even if the payroll tax cut is extended, the structural deficit will decline by 1.4 percentage points.

In the euro zone, Germany, France, Spain and Italy all managed to reduce their structural budget deficits, the latter three thanks to austerity. All are expected to reduce those deficits further this year. But this is not the good news it seems. Austerity, the IMF has found, could be making Europe’s crisis worse, rather than better.

The IMF studied how credit default swap spreads react to a variety of economic indicators. Larger primary deficits (which exclude interest) lead to wider spreads, but only in the euro zone. More surprising, neither long-run deficits,long-run trends in pension and health care spending, nor long-run economic growth, had much impact. But near term growth did: weaker current-year growth was associated with notably wider spreads. 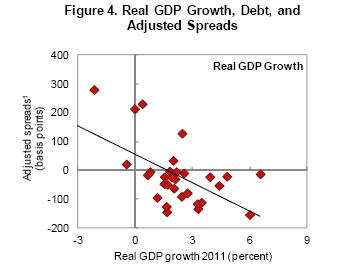 As Carlo Cottarelli and Laura Jaramillo of the IMF note in a related analysis, this is surprising. In theory, investors should see long-term growth as most important for solvency. The fact that instead they are focused so much on short term growth has troubling implications. Tighter fiscal policy, by hurting the near term growth outlook, could actually lead to wider, rather than narrower, spreads. They note:

The fact that markets are focusing in 2011 on short-term growth developments may reflect strong risk aversion after four years of market turmoil. The unpleasant implication of this short-termism is that a tightening of fiscal policy may raise rather than reduce spreads if it is accompanied by a decline of GDP (with respect to the baseline). Indeed, the estimated coefficients imply that this would happen for a fiscal multiplier higher than 1.2-1.3 (in this case the primary balance would improve, but the debt to GDP ratio and the CDS spreads would increase).

Got that? Cut the deficit too aggressively, and the negative impact on growth and the rise in the cost of debt service from higher spreads could result in a higher, not lower, debt-to-GDP ratio.

It is not clear if the IMF thinks that has actually happened, and it recommends caution in interpreting these results. The analysis examined behavior across countries rather than across time, and thus the results may reflect circumstances unique to 2011.

Still, the findings are sobering and explain the IMF’s advice that countries that have not been cut off from the markets must avoid further discretionary austerity. “Decreasing debt is a marathon, not a sprint,” observed Olivier Blanchard, the fund’s chief economist. “Going too fast will kill growth.”

Note: the statistical results are on page 34 of this slideshow.

View all posts by economistasfrentealacrisis →