I’ve always viewed Spain, not Greece, as the quintessential euro crisis country. With Rajoy’s government balking — rightly — at further austerity, the focus is now where it arguably should have been all along.

And with Spain now front and center, the essential wrongness of the whole European policy focus becomes totally apparent. Spain did not get into this crisis by being fiscally irresponsible; here’s a little comparison: 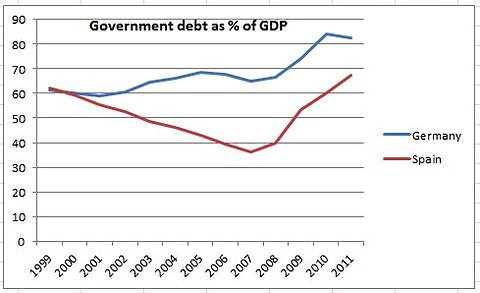 And while we say now that the surplus before the crisis was swollen by the bubble, Martin Wolf points out that in real time the IMF judged that surplus structural.

The question is what to do now. Clearly, Spain needs to become more competitive; maybe the labor market reforms it’s trying will do the trick, though I tend to be skeptical; otherwise it’s about gradual relative deflation — or euro exit and devaluation.

What’s clear is that even more austerity does nothing to help; all it does it reinforce the downward spiral, and bring the possibility of real catastrophe nearer.

View all posts by economistasfrentealacrisis →